I started working as a product designer at Papa John’s in February 2018 and began leading the UX team a year later managing our digital agency. I currently lead our digital experience platform including product management for AB testing, native app, web and customer insights. 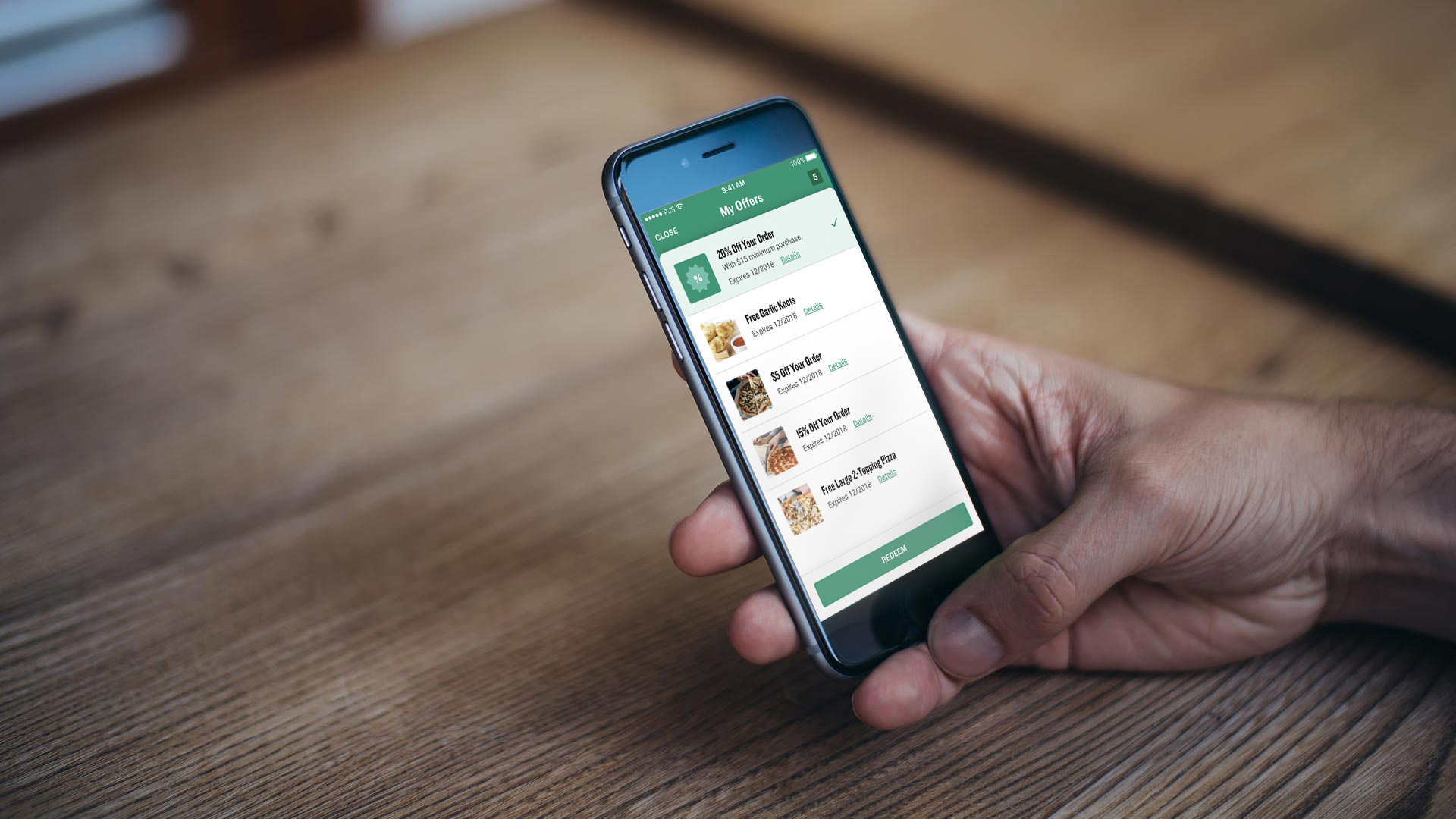 When it comes to product and UX, we want to make sure we're spending our time working on parts of the experience that bring the most value to the user and business goals. In order to understand and prioritize new features and maintain our backlog, we look at quantitative data and qualitative user research to provide those insights. Understanding user journeys and data along that journey is critical to understand where to focus, and improve negative parts of the experience to increase KPI's and customer loyalty.

Our purpose is to accelerate customer value through the design & delivery of delightful end-to-end experiences. As part of our process, we conduct discovery to ensure we are solving the right problems and establishing the objectives and key results. It is a user-centered process that starts with user data, creates design artifacts that address real and not imaginary user needs, and then tests those artifacts with real users.

We built and utilize a pattern library for our UX and front-end development practice so we are designing system of components rather than unique screens. Design systems aid in efficiency across an enterprise organization for speed and consistency. I spoke about design systems at CodeapaLOUsa in 2019. See my presentation here.

In addition to building and maintaining a design system, Papa John's had very little structure and maturity to their UX practice in 2019. I created a guide a process for our team by working with a consultant and our SVP of customer experience. These processes were largely focused on Lean UX methodologies and brought enterprise structure to the UX digital experience platforms we maintained. I created a process guide to document our foundational principles and how we work. 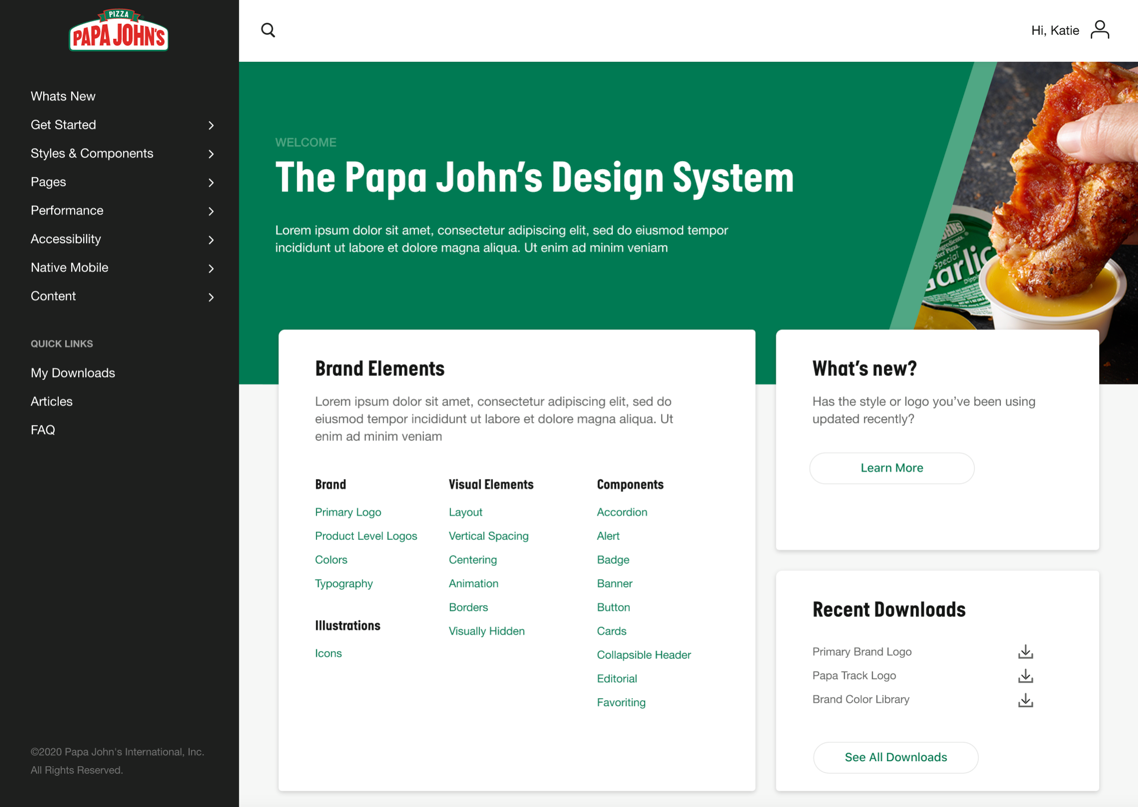 When I started at Papa John's in 2018, we had an Android and iOS app that were designed independently of one another, with completely different UX patterns and UI. We had no holistic, overarching experience principles that defined our digital products, other than a pattern library we used on the web. Both apps had been designed and developed several years apart. One of my primary goals was not only to modernize the UI & UX but to bring the apps to parity, despite sensible platform differences, and eventually update the website from the same design components as the apps. Maintaining a different UX & UI for two apps is inefficient for the customer experience and for the enterprise.

One of my first big projects was redesigning the way users build and customize products. For food ordering apps, this is the core of the experience and important to users to be able to customize their order the way they want it easily. The Papa John's app is a top 20 app in the app stores for food & drink, but the apps that lead the space are all aggregators: DoorDash, Uber Eats, Post Mates. We designed our product builder to be on par with the aggregator experiences, something users had become accustomed to. We also designed this intentionally to work not only to customize pizzas, but any product using a modular and extensible design pattern framework.

As identified in our user journey, at some point in their order customers have to choose delivery or carryout, input their address, and be on their way. It's a necessary step, but not tied to the primary user goal of ordering pizza, which is why we wanted to make it as easy as possible. The previous design had not been updated in several years and did not reflect best in class UX principles such as flexibility and efficiency of use. What we ended up with reduced the number of screens and populated relevant information based on previous orders and closest locations. 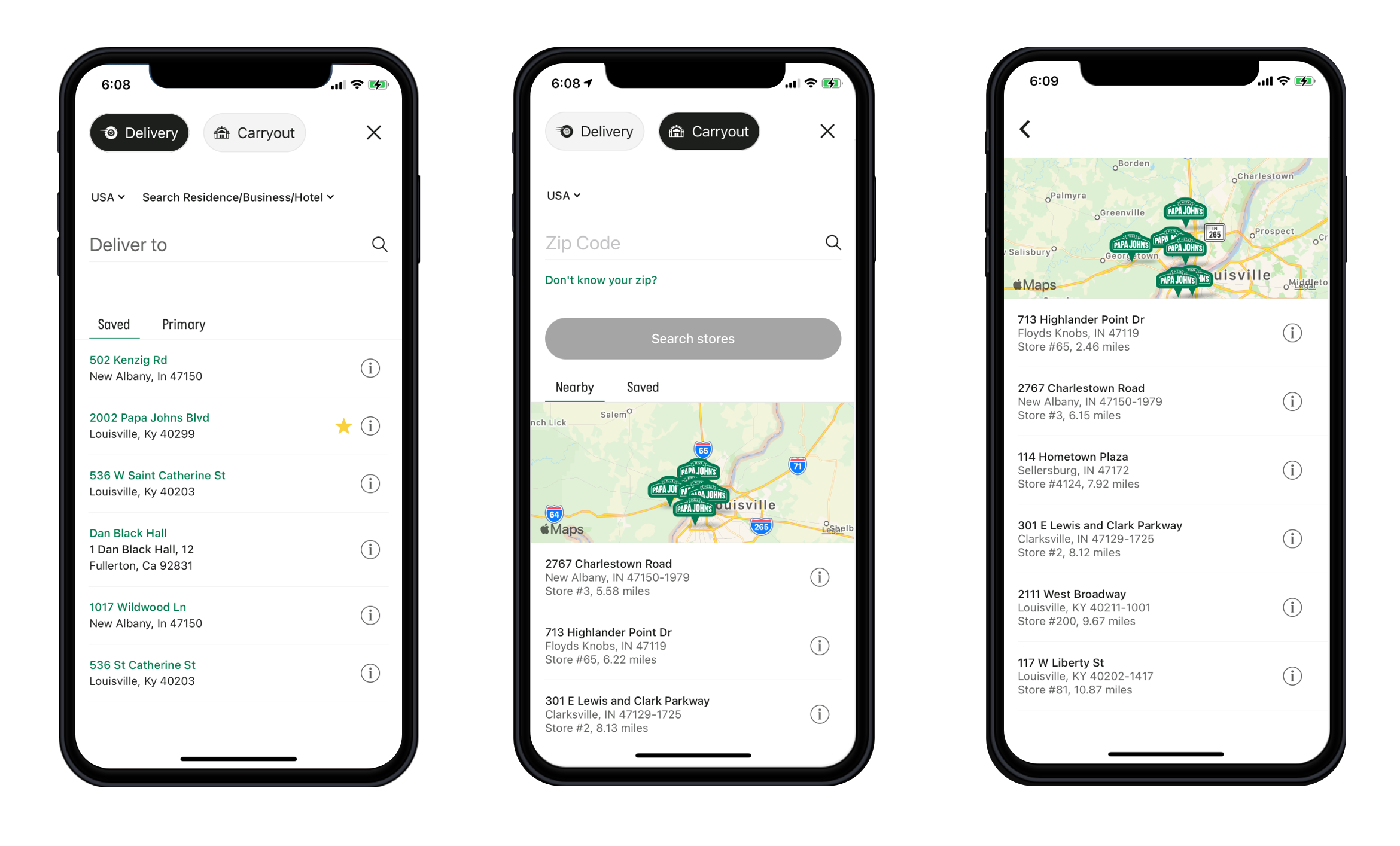 Tipping post-order was a new feature we added in 2020 after we saw driver tips suffer due to COVID19. Papa John's remained fully operational and saw record sales during the pandemic, so rewarding and taking care of our delivery drivers was a top priority. Previously, if a customer didn't tip on the app before checkout, they needed to give a cash tip or sign a credit card slip, both of which were problematic with social distancing for most of 2020. The feature allowed customers to not only tip, but rate their drivers similar to Lyft or Uber. 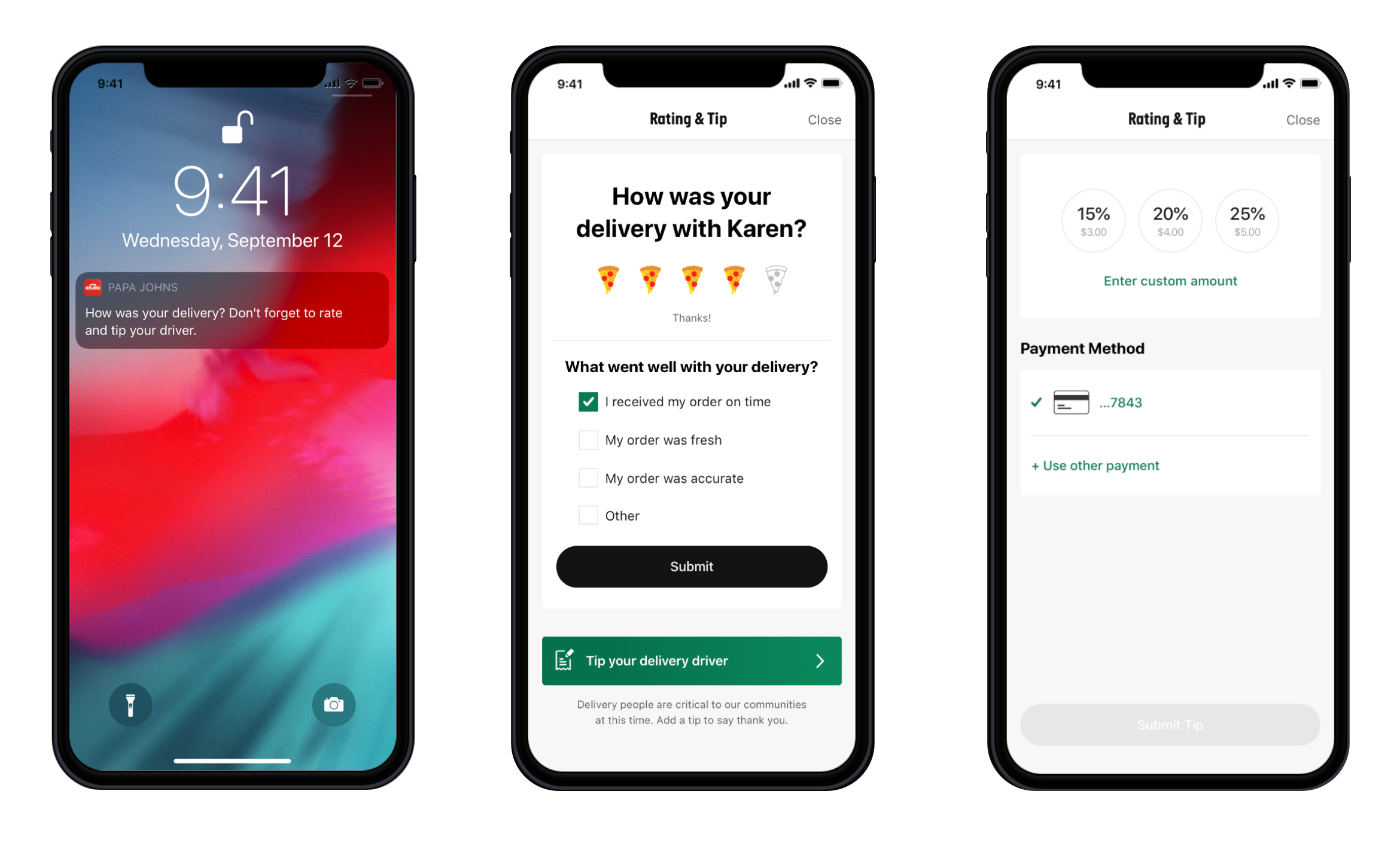 My work from Papa John's goes well beyond what you see here, these are just some highlights. We managed the day-to-day fires, and business as usual updates. Most of my bigger goals revolved around modernizing a dated UI & UX, creating process, bringing a unified design system across products, and leading the business initiatives behind the digital experience. We had a small team of about 10 designers, analysts and front-end developers who worked closely with engineering, and with relatively small resources for a company of their size. I am proud of the work I accomplished there, not only did we hit our KPI's but I what I am most proud of is that I feel the work set up the organization to grow into a mature design organization in the future. Ultimately, I'd love Papa John's to be known as a company that provides great customer experiences and would like to think I contributed to that. Also, I ate a lot of pizza. 🍕